To SPAC or Not To SPAC, That is the Question

SPACs are everywhere. But what exactly are they? And is a SPAC the best funding vehicle for your startup?
Walt Spevak
Walt Spevak is a lead consulting CFO at Burkland - managing the Healthcare CFO practice and CFO sales operations
linkedin.com/in/walt-spevak-241120/

Hardly a day goes by that we don’t hear about another private company ‘going public’ by way of a SPAC. Most of us know that SPAC stands for Special Purpose Acquisition Company and few people know much more than that. This article will explore what is a SPAC, whether a private company might want to be acquired by one, how to prepare to be acquired and how Burkland can help either the SPAC or the target company.

What is a SPAC?

A special purpose acquisition company (SPAC) is a company with no commercial operations that is formed only to raise capital through an initial public offering (IPO) for the purpose of acquiring an existing company.

A SPAC comes into existence when it is formed by one or more people and sells shares on the public market as a way to raise capital. Notable SPAC founders include Reid Hoffman, Sir Richard Branson, Barry Sternlictht, and Peter Guber. A SPAC typically goes public at $10/share. Is it worth $10/share? Who knows! Technically it is worth nothing, ok maybe $10/share, as the SPAC’s only assets on day one are the cash raised when going public.

A special purpose acquisition company (SPAC) is a company with no commercial operations that is formed only to raise capital through an initial public offering (IPO) for the purpose of acquiring an existing company.

The “Special Purpose” of raising the capital is to acquire one or more private companies or assets (ie. the Acquisition part of the SPAC acronym) thus providing a vehicle for a private company to be publicly traded and for the investors in the SPAC to have tangible assets besides cash (and liabilities) on the SPAC’s balance sheet. The SPAC’s valuation and share price will then be based on the investor’s belief in the formerly private company’s future. 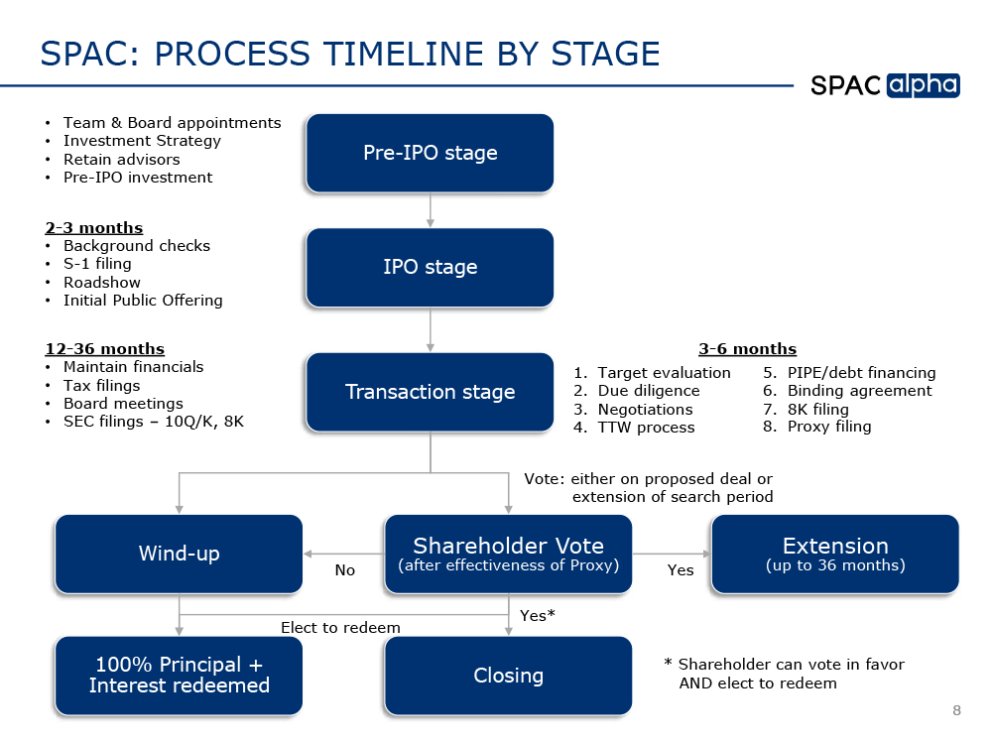 Why and When Might a Private Company Want To Be Acquired by a SPAC?

Going public can be a tedious process taking management time and capital away from running the underlying business. It also involves a lot of expense and scrutiny. The IPO process can take over a year versus a merger with a SPAC which averages around 3-4 months. There also isn’t the need to evaluate and price shares in advance with a SPAC acquisition which during the IPO process requires an investment bank to perform the research and initiate coverage – another time constraint and expense.  A SPAC is a convenient way to create liquidity for a private company. It can also be more financially advantageous since there are fewer costs and expenses and the timeframe is accelerated.  Target companies are typically later-stage businesses (Series D or later) with solid revenues, a healthy sales pipeline, and established management teams.

Burkland CFOs find these resources to be very helpful around SPACs

How Can Burkland Help a Private Company Wishing to Be Acquired by a SPAC?

Should a private company have the good fortune of being a target for a SPAC the transaction will or will not proceed quicker with an experienced finance team supporting the due diligence effort. Burkland works with early-stage companies to prepare them for future growth. Sometimes the growth is organic. Sometimes through a funding round to accelerate growth. And sometimes through acquisition to accelerate growth and provide liquidity for founders, employees, and investors. Our core purpose is to help clients to have accurate financials and projections so that when an investor comes along, perhaps a VC or a SPAC, the company’s financial house is in good order allowing the financial side of the transaction to move ahead without surprises.

How Can Burkland Help a SPAC Wishing to Acquire a Company?

Burkland’s full-stack finance/HR team of strategic consulting CFOs, FP&As, controllers, bookkeepers, tax, and HR professionals are frequently called upon by venture capital firms to perform financial due diligence in a cost and time-efficient manner for a target investment. As described above, SPACs exist to make targeted investments, albeit with the purpose of bringing the target company into the public markets. The due diligence involved for both engagements is similar.

The bottom line on whether a SPAC transaction makes sense is between the SPAC and the target company – each situation is unique. One thing is certain though,  the likelihood of SPACs continuing to flourish is high.

Burkland provides expert Fractional CFO services, Startup Accounting services, tax services and people operations to 600+ startups across the United States. Reach out to us to learn more about how we can help your startup or portfolio company.